Posted on June 29, 2012 by Escudero Photography

Nicole and Steven were married at Down’s Chapel Methodist Church in Clayton Delware. Escudero Photography also brought a photobooth to their reception at the Leipsic Fire Hall in Leipsic Delaware while

photographing their special day. When we asked Nicole about how the couple fell in love, we discovered it was a special day a long time in the making.

Steven and Nicole met on the first day of kindergarten because they were in the same class and rode tricycles together. The two became great friends from the start and grew up in the same neighborhood. In grade school, Nicole wrote her very first love letter, in lipstick,

and was addressed to Steven, of course. Eventually they went their separate ways in high school, and soon after that Steven moved away so they lost touch altogether. Every so often Nicole would see Steven’s mom and ask how he was doing, however life went on. Years later, Nicole moved down to Florida and only three and a half months later Steven managed to find Nicole on Facebook. They began talking on the phone regularly and three months after that Steven bought Nicole a plane ticket back to Delaware so she could visit her family… and him too! The four days they spent together were so great, Nicole knew she didn’t want to spend her life without

Steven. When she flew back to Florida on a Monday, that Friday Steven drove all the way down to Florida to pack up all of her belongings and take her back home to Delaware. Since then, they haven’t left each other’s sides. Now they have a son together and

Steven’s daughters are part of the family as well. The way Nicole put it was: “I feel like this is my fairytale. He is unlike any other man….he is my soulmate.” 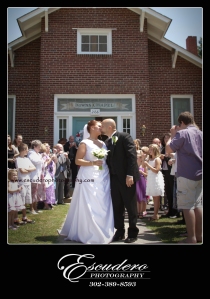 We are so glad Nicole and Steven reconnected and fell in love. Their local wedding was beautiful and the pictures say it all. If you are looking to capture some of your love on your special day, Escudero Photography would love to be your professional wedding photographer.

Read all of our Wedding Rentals, Wedding Photography Reviews at

This entry was posted in Wedding. Bookmark the permalink.